Menu
×
You are here: Home / Halloween Articles / What is Halloween and how people celebrate it


Halloween is an annual holiday celebrated on October 31, which commonly includes activities such as ”trick-or-treating”, visiting haunted attractions, costume parties, playing pranks, telling scary stories and watching horror movies. It is the time of celebration and superstition.

But how people celebrate Halloween in different countries?

In Ireland, which is considered to be the birthplace of Halloween, the day is still celebrated like it is in United States. In rural areas, bonfires are lit and children dress up in costumes to spend the evening ”trick-or-treating” in their neighbourhoods. After the visiting, most people attend parties with their friends, relatives and neighbours. At these parties many games are played – bobbing for apples, treasure hunts with sweets and pastries, also card games with hidden sweets under them, as well as ”knock-a-dolly”, where children knock on the doors but then run away before the door is opened.

In Austria some people leave bread, water and lighted lamp on the table before going to sleep, as it would welcome the dead souls back to earth.

In Belgium people are lighting candles in memory of dead relatives.

In China, the Halloween festival is called Tend Chien. Food and water is placed in front of photographs of family members who have departed while bonfires and lights are lit in order to light the path for dead souls who are visiting the Earth this night.

In Czech Republic, chairs are placed by the fireside on Halloween night. There is one chair for living family member and one for each family member’s spirit.

Unlike most nations of the world, Halloween is not celebrated by the French in order to honour the dead souls; it was even unknown until around 1996. Halloween was regarded as ”American” holiday. Halloween was heard from foreign residents as well as children found out of it in their English classes and as French love parties then more and more people started to celebrate Halloween – costumed people of all ages going to parties at friend’s homes, restaurants, bars and clubs. The costumes tend to be ”scary”- mummies, ghosts, witches and vampires. Stores, malls and restaurants decorate their windows accordingly. Many companies use Halloween in their ads.

In Germany, the people put away their knives on Halloween night because they do not want to risk harm to or from the returning spirits.

In Hungary, teenagers often have Halloween party, when everyone get costume and play little games. Before Halloween many decorate also their houses with pumpkin lamps.

In Honk Kong, the celebration is called ”Yue Lan”. People burn pictures of fruit and money this time as it is believed that these images would bring comfort to the ghosts.

In Italy, Halloween was popularized between the 20th and 21st centuries by television and merchandising coming from USA. As a result in 2009 already 10 million people announced that they are celebrating Halloween. Now throughout Italy you will see carved pumpkins and costumed kids. In some areas you can find tours of medieval towers, castles and catacombs lined with mummies and bones.

In Japan, people do not celebrate a western-style Halloween. The Japanese celebrate the ”Obon Festival”, which is also dedicated to the spirits of ancestors. Special food is prepared and bright red lanterns are hung everywhere, memorial stones are cleaned and community dances performed, candles and fires are lit everywhere in order to show their ancestors where their families might be found. Traditionally, in rural areas where gravesites are in the neighbourhood, the pathway from the graves to the home is swept clean, and a general house-cleaning is also done. On the 13th the altar is set up with various food offerings, and welcoming fires are set in front of the house to welcome the spirits. On the 15th ”send-off-fires” are lit, and spirits return to their graves. ”Obon Festival” takes place during July or August.

In Korea, the festival similar to Halloween is known as ”Chusok”. The families pay respect to their ancestors by visiting their tombs and making offerings of rice and fruits.

In Latvia, people celebrate ”Candle evening” when candles are lit on the graves of their ancestors. It symbolizes eternity for dead souls.

In Romania, Halloween is celebrated around the myth of Dracula on October 31. In Transylvania there are many costumer parties. Also the spirit of Dracula is believed to live there because the town was the site of many witch trials.

Halloween is becoming more and more popular all over the world. Thanks to American movies other countries find out more and more of Halloween and decide to celebrate it. Still in many countries Halloween is a work day but it does not stop people to give their respect to the dead souls and to have fun with their friends, relatives and neighbours. 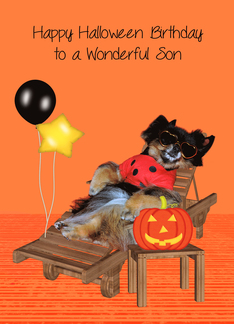